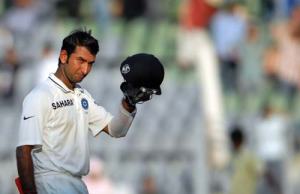 Welcome to the fraternity Pujara!

You know that I have been very vocal about the plight of Indian Husbands in 21st century. I know some of you see it with skepticism and some even ridicule it outright. Well the issue is not only deep rooted in Indian marital system it’s pervasive even amongst the athletes and celebrities in India. Only a month ago Indian women failed to beat Australian woman (who went on to win the championship) in front of home support, Indian Men scored second successive victory against Australian Men in Cricket Matches. Cheteshwar Pujara, India’s emerging cricket talent played a pivotal role in India’s massive victory and was judged player of the match. In his acceptance speech he inadvertently made an honest confession that the driving factor of his success in the game was in fact the pressure on him due to spousal concerns.

He said “There was a bit of pressure on me. I just got married, and my wife was worried I should perform”. So this is not just a small time blogger crying foul on being an Indian Husband, the testimonial of terror are trickling from all walks of life. Every Indian Husband is pressurized (bullied is not an appropriate word) by their beloved wife. No exception there.

Some perceived a deliberate double entendre in his statement; idle minds are always like a parliament in session – interpreting the unobvious in the obvious. When talking at a Cricket stadium he would only talk about his cricketing performance, why would he even bring his performance around house-hold chores in public? That’s one painful topic Indian Husbands wouldn’t feel comfortable confronting themselves with, leave aside admitting on public television! That’s my biggest concern being Indian Husband. No one takes us seriously. One (mis)statement about your significant other and instantly you are subjected to twitticism (witty tweets), cynicism is pelted upon you by women disguising under phony guy names.

A player of the match, co-incidentally happens to be a newly crowned husband makes an honest confession. Why can’t people take it positively? Even in his open admission he credited his wife as a motivating factor. How often we see it the other way around?  It all boils down to choice of words; had Pujara stayed with the conventional wisdom saying “behind every successful husband is a happy woman (wife)” and he would have been off the hook. But he got bit carried away and chose to say what his heart murmured 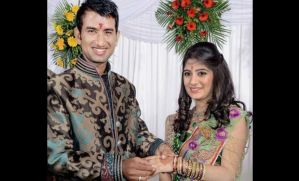 Pujara with Motivation behind India’s success!

If I may humbly plead the womenity (humanity minus men) of the world on behalf of Pujara & al husbands; Cheteshwar Pujara is a cricketer, his area of excellence involves around thick blade of cricket bat and not a sharp edged pen. I am sure he will be more careful in future making statements about his better half in public; O dear merciful women – supreme creature on this planet, can you be bit more compassionate and forgive his first offence? I promise to chant 100 more “Hail feminism” in my prayer tonight.

Amidst all the Pujara hullabaloo, my wife complains, it’s my performance that puts her under pressure. Yeah right, blame it on husband!